I wanted to share from personal experience some ideas of what worked for us for travel toys. It took a little asking around to get some good ideas and our agency lists some basics of things to bring to keep your kids entertained in the hotel room, traveling on the airplane and waiting for the embassy appointment. The typical ideas were:

I searched around for some unique and stimulating toys and games that would keep the kiddos entertain. We knew that Tate liked balls, so we brought a blow up beach ball and punch balloons. Got those at the dollar store and they were a hit !!! 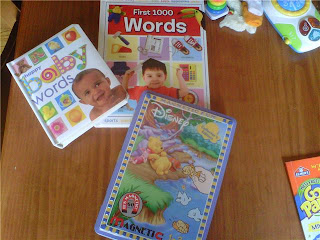 Here we have some books with lots of pictures. I thought these would give us something to talk about. Point to the picture and say the English word...have them say the Amharic word. Another activity book (not pictured) was a sticker book. Tyce and I worked on that together (good bonding activity). I wished I had brought a small story book. These were just pictures with no story. We also had 2 of these magnetic games/toys. You can look for them at toy stores or even at Cracker Barrel (they have FANTASTIC travel games and toys). 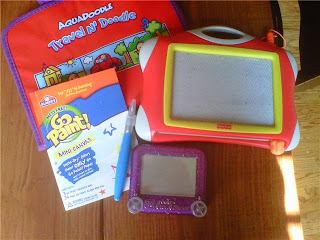 Here were coloring/writing toys. Aqua wonder, magna doodle, etch a sketch, and the painting toy. We also brought coloring book and colored pencils. I wish I had brought just a notepad and pencil. Tyce likes to write his ABC's (something he learned at the orphanage). 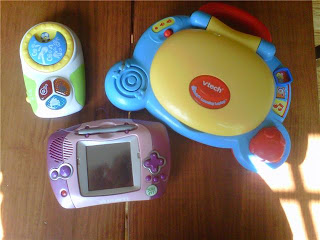 Electronic toys !!! These were a hit. The lights...the buttons...the sounds...they LOVED these. Even though they were a little young for our 4 year old, he was equally entertained. These kids are into buttons. So, if you don't want your kids taking over your cell phone and camera, bring something with buttons. The only thing that wasn't a big hit...the Leapster. They couldn't figure it out. Simple was better. Developmentally, most orphans are behind, so younger toys are just fine. On a different note, the music toy with the yellow circle was a coping toy for Tate. I had that when we met the boys and pulled it out right away. He spent most of our week together holding that toy up to his ear. 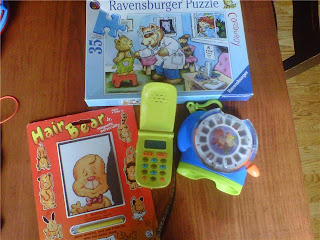 This little green cell phone was a great toy for the 4 yo. Buttons and sounds and lights. That way our little guy could use the music toy in the previous picture. The travel view master was cool too. We clipped it onto our back pack and all the kids loved it. I also packed the puzzle in a ziplock baggie and photo copied the cover of the box. That was a good toy to play with together. Interactive with parent and child. 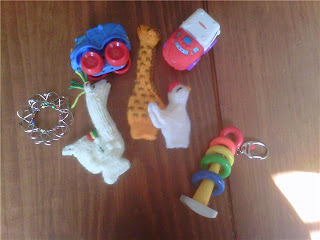 Here are some small goodies. Finger puppets, cars, key chain size stacking rings. We also had matchbox cars, matchbox airplane (to explain where we were going and what we would travel on), and wind up toy bugs (not sure where those have ended up). The wind up toy was a good toy. Again, something to interact with your new child but not too close and intimidating. The BEST hit of our trip was a whirly toy I found at the dollar store. Junky little thing but it was clearly a GOD thing to have brought it. You can see it in all of our gotcha pics (here and here). I have also seen some cool whirly toys and have thought they would be a fantastic toy to bring when you meet your children.

We also brought a portable DVD player to use in the hotel room. We had learned that the kids watch quite a bit of TV at HH (the transition home). Even if our DVD's were new to them, it gave us something to do those long days. And some of the hard days, the boys just needed to zone out. It is a LOT for these little minds to comprehend. Some down time is needed.

I strongly suggest bringing toys when you meet your kids. Interaction that isn't too close and intimidating. Coloring side by side would be too close. But throwing a ball back and forth or racing cars back and forth would be a good idea. It could be terrifying for some children to meet their new family and setting realistic expectation for that meet and greet is a good idea. 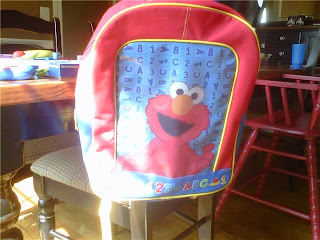 When it was time to travel home, we brought out the backpack that was hidden. I worked hard at pulling out different toys each day. Rather than have it a free for all as soon as we got to the hotel room. I had saved new and different toys for the plane ride. But to be honest, we just prayed for God's mercy as we traveled home. It wasn't the easiest of trips, but we did make it home in one piece.
Posted by crispy at 5:08 PM 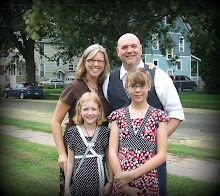